Maps generated by theGreat Circle Mapper -copyright © Karl L. Swartz.
Back in September 2014, I was informed that Swiss were having a pretty good sale. The best bargain to be had was on their flights between Geneva and Copenhagen – with ticket prices at around £25 for their business class cabin. Fellow a.netter Gabriel asked if I wanted to join him on a date in December – I did, however as I had long run out of leave from work by then, I had to decline his offer. I still looked at other dates though, as I’d heard great things about their airlines Business Class. I eventually settled on a date in mid January on the GVA-CPH sector.

This left a slight issue – I don’t live in either Geneva or Copenhagen! No matter. I decided to fly out to Geneva the previous day and I studied various options. The previously mentioned Swiss sale meant that LX were once again the cheapest on the LON-GVA route – with a decently timed flight on their seasonal Gatwick operation.

The final piece of the puzzle was to find my way back from Copenhagen. SAS came in with the best flight times and prices, so they were the winner. Also, a (very) slight bonus would be that this flight would be operated by the A320 – so far I’d only been on SK 737’s. It would also be my first time using T2 at LHR.

So a trio of Star Alliance flights for the weekend. A bit of a culture shock as I’m firmly planted in the OneWorld ecosystem. Still, it made a change from the seemingly endless BA flights I took in the final months of 2014.
On to the journey then:
I took a pretty empty train to Gatwick, arriving at around 8AM.

I headed over to the Swiss check in area to grab a souvenir boarding pass, before heading through security.

Security was an experience. Once I’d reached the front of the queue, the machine had a bit of a technical glitch, therefore everybody had to give up and head over to another queue. The staff said we would be given priority but it seemed like this priority was only granted once the people at the front of said queue had passed through – the whole experience taking around thirty minutes.

Once I was through, I had a choice of two lounges to access via my Airport Angel card – the Aspire lounge and the No.1 Lounge. I opted for the Aspire lounge as I’d not been in that one before. I was given a half hearted welcome and once I was in, it was small, busy and there were virtually no views to be had.

At least they had bacon rolls

After around thirty minutes, I surrendered to the No.1 lounge…

Except I was told that they didn’t accept airport angel. Funny, they did on my last visit. Plan C then was to grab a drink from the Bridge Bar.

That didn’t work out either as it had transformed into a Nandos since my last visit, so I sat and used Gatwick’s pretty slow wifi to check in for my flight from GVA-CPH the following day.

Once I had done this it was more or less time to head down to gate 24.

Once there, I was finally able to get some view of the action outside. And as the air was more or less deserted, no issues with photography either.

G-VROM back in action after its mishap a few week previously. 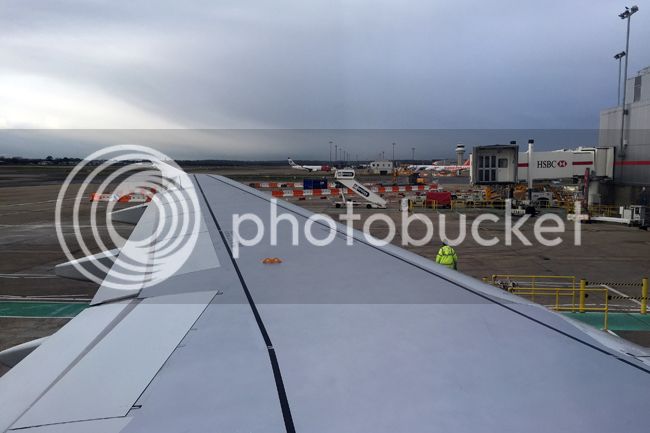 A few moments later, the boarding complete announcement was given and I’d managed to score the entire row to myself.

We pushed back around ten minutes ahead of schedule and made the short journey over to the runway.

Once we were there, it became apparent that ATC were sending the heavies off in one go, so we waited for ten minutes. During which time I had a great view of Golden Girl passing by.

Once the bigger guys had left, we ambled forwards on to the runway and lifted off into some initially clear skies, that soon turned grey.

As we passed through the bad stuff, the seatbelt sign was turned off and the crew started their service, a choice of a cheese sandwich or nothing. Still, it was better than the birdseed that BA dish up. I also asked for some “tea” and a water to wash it down with.

I’m not too sure what was going on with the tea but the cheese sandwich was very tasty.

Meanwhile, I took the time to update the report and listen to a bit of Royal Blood.

For the rest of the flight, I took advantage of their being nobody behind and reclined whilst watching the various Swiss scenes on the overhead screens.

Descent started around thirty minutes prior to arrival.

The famous Swiss chocolates were handed out a few moments later

There wasn’t much to be seen until on very short finals.

Once we did land, it was a short journey over to our remote stand.

Once we did arrive, everybody was up instantly despite the seatbelt sign still being on due to one of the engines still running.

Once the remaining engine was shut down, the whole aircraft was plunged into darkness.

The lights soon came on again though, and it was down the steps and on to a bus to the terminal.

Passport control was a little busy, but it still only took around ten minutes or so. Once I was in, I grabbed a free train ticket from the machine in baggage claim and headed off to find a train to the city.

As I still had a couple of hours or so until I could check in to my hotel, I took a look around the city.

Like most cities, the old town was of most interest.

I then made my way to the Design Hotel F6 where I had reserved a room for the evening.

During which time I checked in for the following days SK flight. 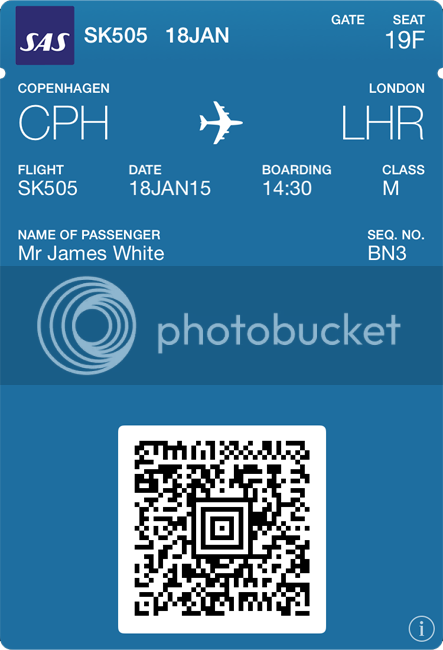 Some more shots of the city after dark.

Early the next morning, my alarm was sounding at 06:00. I got ready and headed out to the station to make the six minute journey to the airport.

Once there, I grabbed a souvenir boarding pass from the LX business desk. There was a family ahead of me with a whole load of suitcases, yet the two agents on the first dest continued to sit there chatting amongst themselves rather than call me forward.

A few moments later, I met up with fellow trip reporter Signol, who by coincidence happened to be on the same flight as me.

We passed through security and made our way up to the lounge for breakfast.

After around thirty minutes, we headed off to the first class lounge, courtesy of Signol’s Star Gold card – thanks for that! The first lounge was more or less the same as the business lounge, although smaller and busier. They had a few more food offerings but not too much.

After this, we made our way down to the gate. A plane pulled on to stand and it became apparent there would be a bit of a delay – although as far as we could hear there wasn’t any announcement made.

Boarding commenced at around 09:00, but we were then held on the jet bridge for a good ten minutes.

I was handed a bottle of water and a wet wipe and asked if I wanted a newspaper. Flight time was announced as an hour and forty minutes.

We pushed back twenty minutes or so behind schedule.

It was then a pretty quick taxi over to the active, where we joined a pretty long queue for takeoff.

We finally did make it into the misty air forty minutes or so late.

After takeoff we were treated to some very good views of the surrounding area.

Shortly after departure the meal service began. At around the same time the captain made an announcement – I couldn’t really understand much of what was being said, but he did apologise for the delay.

There wasn’t any choice in meal selection – other than the bread.

I initially didn’t want to risk the tea again, but I then noticed Signol received a mug with its own bag and two chocolates. I figured if I could make my own maybe it wouldn’t be quite so bad? I ordered some and it came from the usual airline style tin tea pot – so the lukewarm milky mess I had on my previous flight. And I didn’t get any chocolates…

The rest of the flight was spent in seat 2D talking to Signol who was seated in 2F. During which the purser did the rounds with the chocolate basket.

Descent started around thirty minutes before landing, so I made my way back to my own seat.

There wasn’t too much to be seen on approach due to the cloud cover.

We touched down and made our way over to the A gates, disembarking a few moments later.

After a brief stop at the Transfer centre to get some boarding passes, we had a brief look at what was around.

Before heading up to the SAS lounge, where Robin once again guested me in – thanks once again.

We grabbed a pair of seats in a quiet corner and spent the next couple of hours chatting.

At around 14:00, I made my way through passport control and along to gate D102 where a pretty lonely looking A320 was waiting.

As it turns out, this particular one is no stranger to LHR, having started its life with British Midland back in 2001 as G-MIDV. In somewhat of a coincidence, a few moments later, former sister ship G-MIDT (now wearing a BA uniform) pulled on to the adjacent stand.

The flying time was expected to be an hour and a half.

We pushed back a couple of minutes early and headed over to the runway, departing pretty quickly.

We were into some clouds soon after. 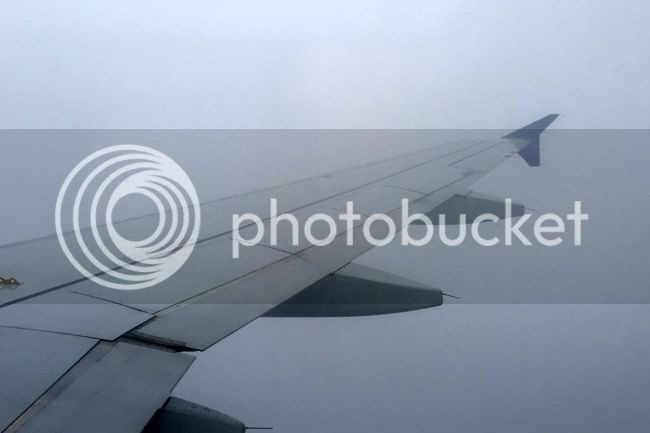 And just a few moments after that, we emerged from them again.

Soon after, I watched a couple of episodes of Family Guy on my iPad.

During which time the Drinks service was performed, with seconds offered a few moments later.

I stuck with the iPad until a few moments before descent started.

We took the scenic route past London, which was lit up brilliantly in the low winter sunlight before touching down on to 27L.

We pulled in next to an A3 A321, and as it turned out we were parked on probably the nearest stand to border control.

From leaving the plane to seeing the sculpture out the front took around five minutes at the most due to there being no queue at all at the E passport machines. It was then through the tunnel to the bus station.

And with that, my first trip of 2015 was at an end.
Swiss continue to impress, and I’m glad I had the chance to try their business class cabin – the only slight complaint was that they could have offered a little more for breakfast – but maybe I’m being a little picky.
Same goes for SAS – if you can find a decent fare, then they’re a very good airline with friendly crew and a decent lounge, at least at CPH.