Maps generated by theGreat Circle Mapper -copyright © Karl L. Swartz.
This report starts out with a message I received from fellow a.netter gabrielchew whilst I was in Argentina, back in April. He mentioned that he’d found some great fares to Krakow with LOT over a weekend in June – just £85 in fact. Without much hesitation, I logged on to the LOT website and the flights were booked.

I also splashed out an extra £19 to reserve seats, which is something new since I had last flown with the airline in December 2012.

I guess it was a little pricey, however due to the low fares it didn’t make the final price too outrageous. Also the fact that it included seats for all four flights, meant it was still far better value than the £15 per sector that British Airways wanted to charge me for pre booking seats on a trip to Milan in August.
On to the day of departure. I did consider exploring the train, as I was still studying options to get to LHR that didn’t involve the coach but I figured as it would cost the same but take double the time I really wouldn’t gain all that much by doing so. So for the first time in a good few months, it was on to the coach.

Upon arrival at T2, I attempted to use a kiosk to grab my boarding passes, however as I’d already checked in, it didn’t like it and I ended up having to join a queue instead.

A few moments later, it was through a reasonably busy security, where I was singled out for a random search. Once that was done, I finally met up with Gabriel and we headed over to the very decent United Club for a couple of cocktails. 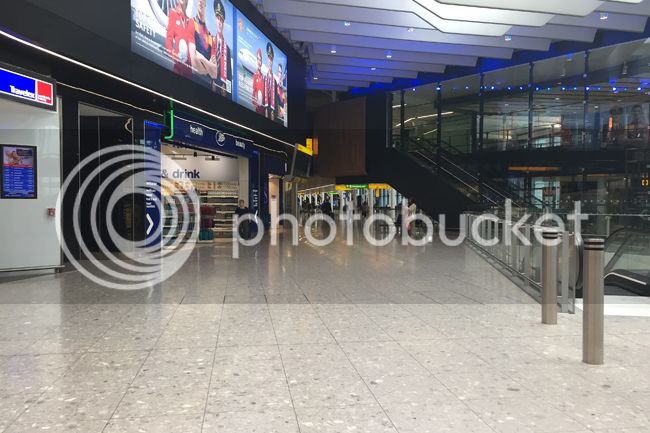 After an hour or so in here, we moved over to the SQ lounge.

The third stop of the day was the Air Canada Lounge.

More cocktails – must admit this one wasn’t all that great.

The final stop of the tour was the LH lounge, which was back in T2A.

After a good few hour lounging, it was time to board. Thanks for all the guesting in Gabriel – much appreciated. I’ll have to make the effort to get myself a Star Gold card…

The cabin filled up reasonably quickly before the boarding complete announcement was given. There was a major downpour happening outside, and my initial suspicions were that this would reduce the flow in and out of the airport.

The captain announced a flying time of two hours, but no delay so I guess we were lucky on this occasion. We pushed back a few moments later and made a slow journey over to 27R.

Once we finally did get going, it wasn’t too long before we were into the cloud.

But a few turns later we were out of it again and it appeared we were dodging a few of them.

Before clearing them for good.

The seatbelt sign went off and an announcement was made although I couldn’t understand a word of it.

I stuck a couple of videos on my iPad shortly after.

During which time, the BOB service was started – and there were quite a few takers. Once the sales service had been completed, the free service began – which was just water and a Prince Polo. Yet another cut back since I last flew with LO back in 2012.

I stuck with the iPad until we were into our descent into Warsaw. 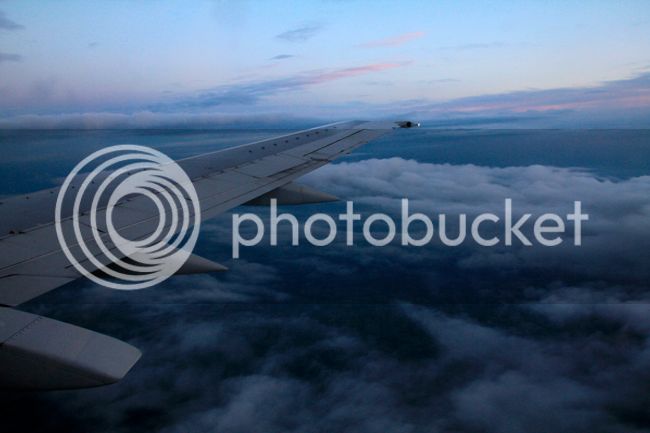 We made a cloudy descent until touchdown. 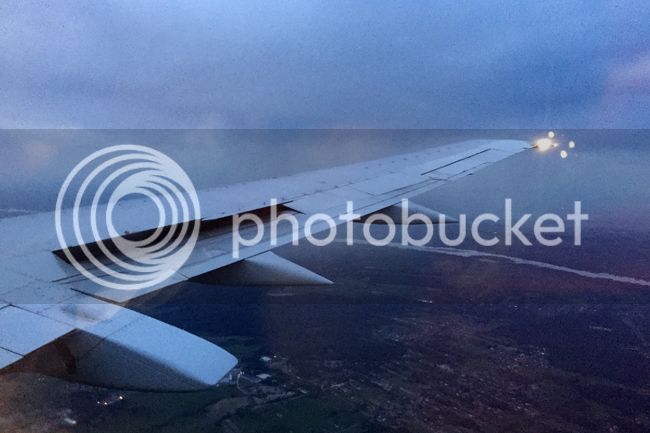 It was then off through passport control, through security and immediately into the lounge.

Around thirty minutes before departure, we made our way down to the gate, where boarding started more or less straight away.

The legroom on this one was slightly more generous.

We pushed back and made our way over to the active.
Departure came, and as soon as the seatbelt sign went off, I ventured back to find Gabriel to see if he wanted to move to the spare seat next to me.

Although as he had the whole of the final row to himself, I took 21D instead. The service was completed pretty quickly and then descent was well under way.

I returned to my assigned seat just as we were passing downtown Kraków.

Not too long later, we touched down, and then spun around on the runway to head off in the direction of the terminal.

It was then on to a bus to make a very short drive over to the temporary looking terminal.

Strange how this was classed as an international arrival

A few seconds later, we were in a taxi heading for the city.

I checked into my very different looking hotel room upon arrival

Then took a walk with Gabriel across the square to his hotel before calling it a night.

The next day, Gabriel made his way back to my hotel and we explored what the city had to offer.

Including some local dancing, complete with noises that sounded like a car crash…

Sheltering from the rain in the castle

Once we were done in the city, we took the bus back to the airport. 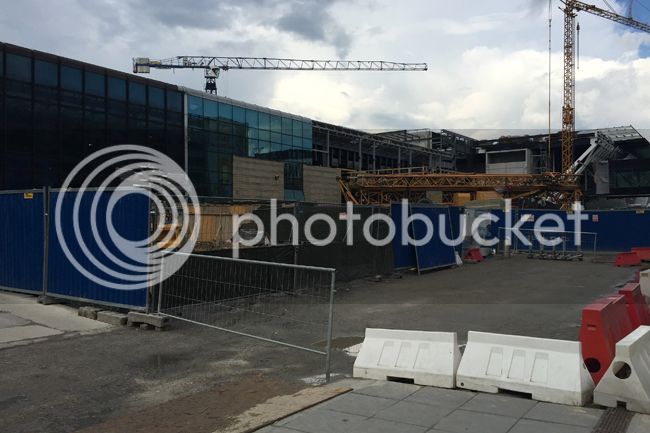 Upon arrival, we headed straight for a busy security as we both had a full set of boarding passes. 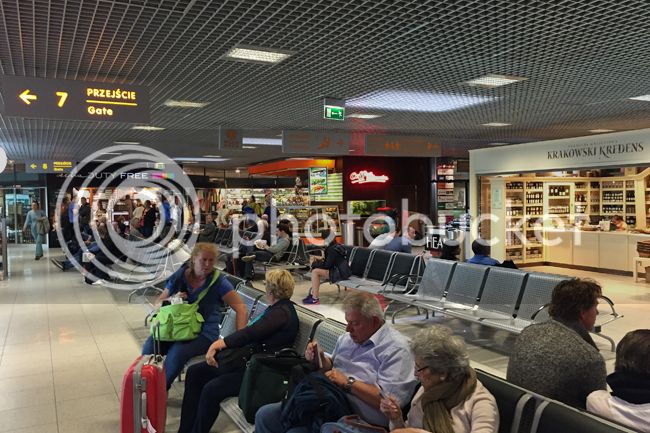 Security was pretty strict – I ended up having to to put a completely empty bag through the scanner, and Gabriel ended up having to put a pocket full of tissues through the x-Ray as they were apparently setting off the metal detector. Hmm. Once this was done, it was over to the lounge, once more courtesy of Gabriel’s Star gold status.

At pretty much the time boarding was due to begin, an announcement was made saying that our flight had been cancelled. So it was back through security and over to the LOT office.

Easier said than done. After around two hours in the queue we were finally seen to. They said that there were no more flights this evening and they initially wanted to put us on LH via FRA or MUC the following afternoon. Instead though, Gabriel had found a routing with AB and BA via TXL in the morning and this was granted without too much fuss. It actually worked out in our favour as we ended up being booked into a pretty high booking class – therefore getting a pretty decent haul of BA Avios/Tier Points. If we had flown with LOT, we would have earned nothing due to it being in such a low booking class.

It was then over to another queue to sort out a hotel. As the Hilton Garden Inn across the road was a very reasonable price, we decided to book ourselves into there instead – rather than have to wait around for them to make a reservation and then take a taxi. The whole process took around three hours.

Dinner, courtesy of LOT. I ended up bringing most of it home with me though, as I wasn’t really up to eating anything.

The next morning, it was back across the road to the terminal. Luckily this time, things were much quieter and we were in the lounge within ten minutes.

We stayed here until boarding was announced.

Despite our boarding passes saying that we had fast track, there wasn’t one available so we were at the back of a long queue, before heading down to a bus. 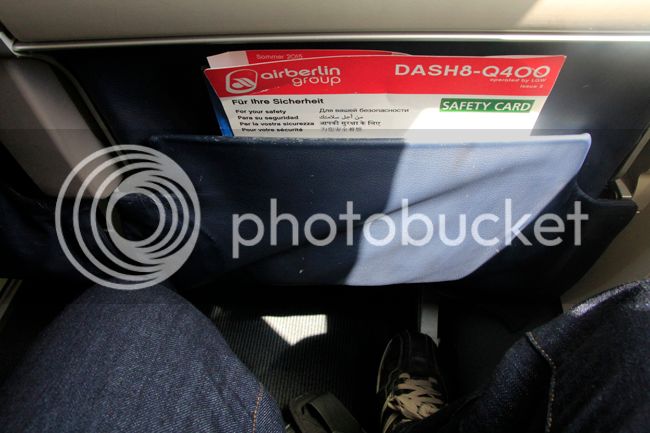 The flight deck announced a flying time of an hour and fifteen, before the engines were started and we made our way over to the active. The initially clear skies soon clouded over.

The crew were a little slow getting the trolley out, therefore by the time I had been served, descent had started.

In fact the rubbish wasn’t cleared until quite late into the descent. The weather wasn’t quite as good in Berlin, but there were a few views to be had on approach.

We touched down and then took the scenic route over to the Air Berlin terminal – with most of the other passengers getting up and grabbing their bags along the way.

Upon arrival, it was a short bus ride over to the terminal, before heading over to the main building.

We then spent an hour or so on the terrace, where there were some quite interesting movements. 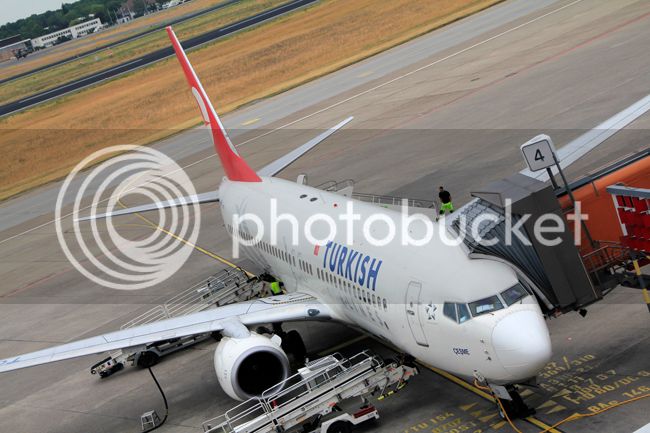 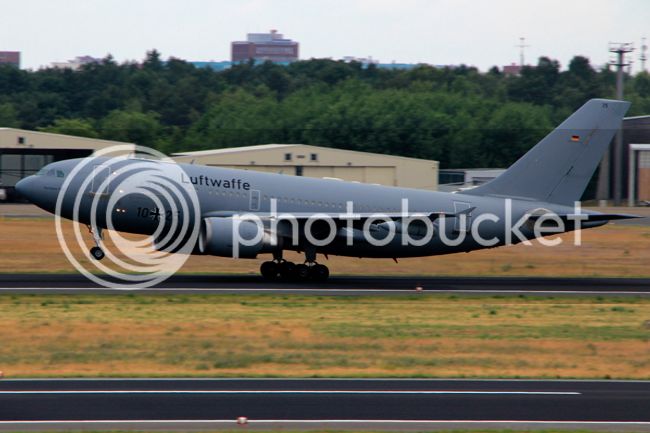 I ended up taking extra time due to the fact I was singled out for an additional random check – this meant exiting the security area, and being taken to a separate room to have my electronics swabbed. A few moments later I was back at the gate area where boarding began a few moments later.

The flight was unsurprisingly full – despite the complaints about BA lately, the “enhancements” are clearly working… And due to this the crew spent a while re arranging bags in the overhead lockers. The captain started his speech, and no doubt he mentioned the flying time, but my attention was drawn to a stroppy elder American woman in the wrong seat and refusing to budge. She eventually did, but made no secret of the fact she would be getting up “at least six times”. We pushed back and headed off into the housing estate for departure.

On our way up, things got a bit bumpy, and we seemed to be in cloud for a lot longer than on this mornings flight.

Also different to the mornings flight was the fact the crew started the service much quicker. It seems that the snacks have now been enhanced to UK domestic levels on a wider selection of European flights now, as on a flight to Frankfurt (which is nearer to London) a couple of weeks previously, I was offered a wrap.

I relied on the iPad for my entertainment on this flight.

Descent began, and the first officer announced that it was a little busy this afternoon, so therefore we had to slow down. But even so, we would still have to hold for fifteen minutes.

We were treated to a great aerial tour of London – probably one of the best I’ve had, before touching down on to 27R.

It was a slow journey over to T5B before pulling on to stand. Finally back in the UK – around 17 hours later than expected…

It was the usual wait to leave before heading back over to the main terminal, and out to wait for the coach home.

LOT – ugh. Battered old 737, uncomfortable seats, cancelled flight, poor planning when it came to rebooking and despite being told by two members of ground staff that the flight was cancelled for technical reasons, flat out refused to pay any EC261 compensation. At least they were cheap…
Air Berlin were consistent with my other flights with them. Decent enough service pretty good crew and no reason to complain. Although its a bit of shame they have to use that temporary terminal at TXL indefinitely.
British Airways – once more, not much can be said about them. Although its a shame the on board catering appears to have been enhanced once more.