Maps generated by theGreat Circle Mapper -copyright © Karl L. Swartz.
Thanks for taking a look at my latest report. I realise that this trip may not be the most exciting in the world – a simple pair of BA A319’s on a standard return to Dublin – a city that I’ve covered before – but hopefully it will still be of interest. This trip starts out much like a few others of mine. At home, on a Saturday, bored. Not wanting to spend Sunday the same way, I remembered that BA now offered some good deals on last minute day trips. I logged on and studied the options.

There were more than a few options available, however going somewhere new didn’t appeal so much as I’d want to spend at least a night there. Having said that, the trip to Rome looked attractive as it would be on a mix of the A321 (a type thats surprisingly thin in my log) and the 767. The times didn’t fit though – departing before I could reasonably get to the airport and arriving back a little later than I would have wanted.
In the end, I decided on making the journey over to Dublin.
There were a few bugs during the online check in process.

Also I couldn’t seem to reserve any seats, which I should be entitled to do. Another glitch was that the booking didn’t show up at all in the BA App. Eventually I did manage to check in online.

I later decided to book an airport hotel, the Doubletree, so I could renew my HHonours status – so in hindsight I could have done the Rome flight after all…
I set off for the airport on an albino National Express coach.

Once I arrived, rather than head straight for the hotel, I decided to take a look at the newly opened Terminal 2. There were a few other enthusiast around taking pictures as it was just a couple of days old at the time.

Bit of a poor start

There are some good views to be had from up here too.

I did eventually make my way over to the hotel on the pretty expensive and not overly frequent Hotel Hoppa service.

One perk of The DoubleTree brand is the free cookie:

The next morning, my alarm was going off at just before 7AM and it was back on to the bus. There was about a thirty minute wait but the weather was decent enough and I had a good view of the arrivals.

As I’d grabbed my souvenir boarding pass the previous evening, it was straight through security.

In true LHR fashion, it wasn’t busy but it was painfully slow.
After this I decided to go and have a look at T2 airside. 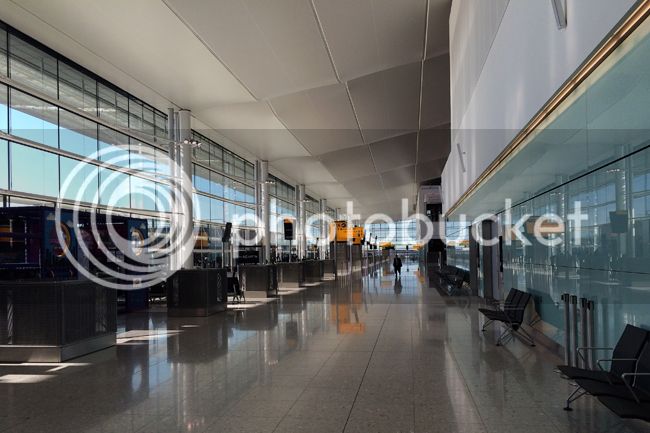 Once I’d finished, I made my way to the BA UK and Ireland lounge.

This used to be a gate area – I remember waiting here way back in 1999 for a BD flight to MAN.

I stayed for around twenty minutes before making my way through the long metal tubes to gate 80 where I found G-DBCI waiting.

I was only in the gate area for 5/10 minutes before boarding started. Unusually, the ground staff seemed to be policing the pre boarding, although the people that were being sent back just crowded the gate area instead, leaving me to awkwardly barge past them.

A little on the claustrophobic side

Once on board, I took my assigned seat of 12F.

The captain came over the PA once boarding was nearing completion, introducing himself and the crew and mentioning a flying time of just 45 minutes. He also mentioned that the senior first officer would be doing the flying today.
We pushed back around ten minutes behind schedule, due to a few bags taking their time being loaded and made or way over to the opposite side of the airfield for a 27L departure.

Once we made it, there wasn’t much of a wait to get going.

I kept myself amused during this short flight with the High Life magazine.

The birdseed was distributed just as descent started.

Much like on my last flight into DUB, we passed the city before swinging around and on to finals.

It was a short taxi over to the stand. The crew announced the disembarking would be via the front and rear doors. As I was sat around the middle, I waited for everybody else to leave before making my way towards the rear exit.

Once I had made my way into the terminal, I was met with a pretty long queue to enter Ireland.

The line moved pretty quickly though, and within a few minutes I was heading for the Airlink bus into town.

I hopped off the bus and went for a walk around the city.

After a pretty quick tour of the town, it was time to head back to the airport. I made my way over to a busy check in area to grab my souvenir boarding pass. I was given directions to the lounge and invited to use the fast track at security.

The hold up for security today was somebody who was flying FR trying to persuade the agent they were entitled to use it as they flew BA the last time… amazingly after much discussion, it worked “just this once”. After security, rather than head straight for the lounge I made my way over to T2 to go to the famous chocolate lounge.

There were some decent views to be had from here too.

Once I was finished, I then made a heavy walk back over to T2. I made my way up to the lounge, and annoyingly the only seats with plugs beside them were in the business centre – so I had to set up camp there as my phone battery was slowly but surely dying.

Not the best food options – not that I was too bothered after what I’d just eaten.

I stayed in the lounge for around 20/30 minutes or so before heading down to gate 302.

Interestingly, there was another BA flight scheduled to depart just 40 minutes before ours. I didn’t realise this and I had thought I’d be flying home on G-EUPK, however it turned out I’d be on G-DBCI once more…

As the inbound flight was running a little late, I hung around by a window overlooking the apron watching the few movements.

My plane finally arrived around thirty minutes late, and I took the walk over to my gate. Once there I was met with a huge queue.

A couple of years ago just one BA plane at DUB was a rarity.

Boarding was announced pretty much as soon as the aircraft had arrived in to stand. Luckily, I was able to bypass the huge queue and use the fast track, which again was strictly enforced. The ground crew took every bodies boarding passes in the queue, scanned them and returned them. A few moments later we were given the all clear and I made my way on board.

The captain announced a flying time of fifty minutes. We pushed back around twenty minutes behind schedule and made our way over to the active, with the flaps being retracted a notch along the way – slight miscalculation maybe?

We lifted off at 16:35 into some skies that were a little cloudier than earlier.

Shortly after departure, the snacks and drinks run commenced, one trolley from the front and another from the back.

Just as I was finishing my drink, descent started and it got a little bumpy.

The first officer gave an update, apologising for the delay and saying there was a ‘cheeky little wind from the south, therefore it may be a little bumpy on approach’. Unusually there wasn’t any holding this evening – therefore we passed by Heathrow, had a scenic tour of London before touching down on to 27L.

It was then a short taxi over to T1, with one engine being shut down along the way.

Part of the LHR furniture now

As we were pulling on to stand, everybody who was so desperate to get on the plane, was now pretty keen to get off of it. I wasn’t however, as I fancied taking a look at the flight deck.

After a few botched photo attempts and a brief chat, it was through the baking metal tubes to baggage claim, which I could bypass.

And then on to the central bus station, where I’d just missed one by a few minutes.

Keeping with the theme of doubles for this weekend, I would go home on the same albino coach that brought me to LHR last night – although I can’t say I was overly bothered about that!

Once more, BA did the job with the minimum of fuss. Their day return fares are great to take advantage of, but I must admit I do prefer staying somewhere a little longer. They also do two day weekend trips, but every time I look, nothing suitable comes up.
Over the course of the summer, I took advantage of a couple more BA day trips. Whilst the page on the site itself vanished in early July, the fares were still there – you just had to search a little harder for them. The BA flights weren’t all that much different to the one’s featured above, so I’ll just share a select few pics.

Ripleys Believe it or not:

G-EUOC would make BA my most flown airline, taking over from VS who were at the top of my list for around 17 years.

The lounge at CPH wasn’t too great. No food whatsoever, just a few drinks.

Luckily I had a few on board

I also managed to get a pretty good tour of the flight deck from the captain.

Breakfast in the South Lounge

On the flight up to MAN, I was lucky enough to catch the only A320 with the new cabin (at the time).

As the flight back to LHR was delayed by around 90 minutes due to bad weather at LHR, it meant there were some pretty good sunset views on the short 40 minute flight.

I also took a couple more day trips in September to Madrid (with IB), and October up to Edinburgh, but I wont cover them here.