Maps generated by theGreat Circle Mapper -copyright © Karl L. Swartz.
So after arriving into Buenos Aires on Emirates, it was time to explore the city.

Heading down towards the fascinating Recoleta Cemetery 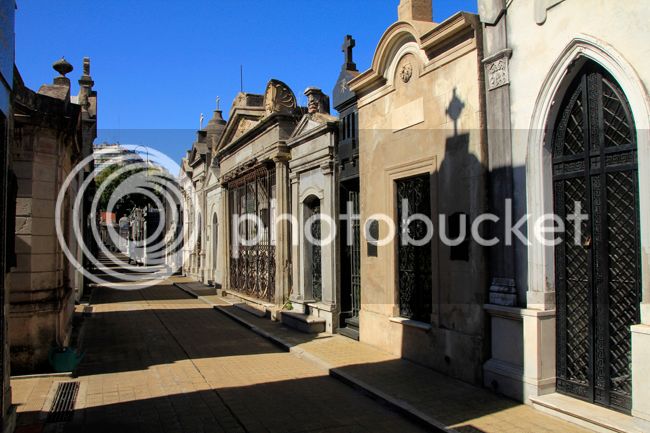 Probably the most famous resident of the cemetery

Back towards the city

And again after dark

The Docklands area – its not Dublin, I swear!

This could so easily have been a scene in London.

Couldn’t come to Argentina and not have a steak!

And a Mostaza Burger. I had 56 Argentine Peso’s in cash and this meal came to 55 – so worked out perfectly.

One tip for anybody planning on visiting Argentina is to bring a stash of US Dollars. If you pay with those rather than by card, you’ll more than likely get the black market rate, which will make things significantly cheaper.
When it was time to leave, the cheapest and by far the most interesting option was on Avianca.

The booking process couldn’t have gone much worse though. I went through the process of selecting flights, entering card details etc.

When I hit the pay now button I just got redirected back to the Avianca home page. Hmm strange. I tried again, but the second time around, it said the transaction had been declined. I phoned my bank to see what was going on and they said that the first transaction had been approved but they had declined the second one – due to two large sums of money heading towards Colombia looking a bit suspicious. So it was then on the phone to Avianca, who gave me a locator, but said they were still waiting for payment. What was going on? Who had my money? The bank said they had sent it Avianca and Avianca were saying they didn’t have it. I had no option but to give up with that and start again – this time through Expedia though, who fortunately offered the same itinerary. Luckily the missing money turned up in my bank account around a week or so later. 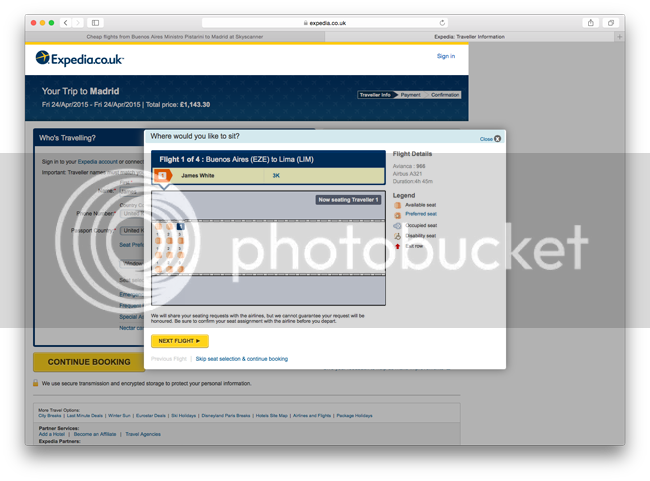 I’d prebooked a Remi to take me back to the airport. It happened to turn up over thirty minutes early, although this was a good thing as we ended up sitting in traffic for most of the journey.

When I did arrive, I made my way over to the AV check in. My bag was sent off to Madrid and I questioned the delay – the agent said there was one, but not to worry as the plane in Lima would wait for me. Hmm well if you say so.

I headed off with a pile of boarding passes.

I made my way though a very easy security (no need to remove laptops, iPads or that dangerous tube of toothpaste I had in my bag) and immigration and up to a very bovine themed lounge – through the obligatory Duty Free shop.

Upon checking the FID everything seemed to be running on time – maybe there wasn’t a delay and Google had got it wrong? Not much can be said about the lounge really – not much in the way of food or drink and awful wifi that keep dropping out every few seconds. At least it was comfortable enough.

Seemingly everything came with caramel in this place.

I headed off a little early to grab a few pictures of what was around.

I made my way down to the gate at the time advertised on my boarding pass.

It was only now that they decide to advertise the fact there was a delay.

I’d known about it since I turned my phone on when I woke up – so why the big secret until the last possible moment? Normally I would be getting a little concerned about my connection, but as I also was advised by checkmytrip that this flight was delayed too, it wasn’t a big deal. And even if it wasn’t, I had the check in agents word that the plane would wait….
A few moments later, an Avianca coloured plane did turn up – and it wasn’t an A321. It had been subbed for an A320. Shame, as I’m a fan of the A321. I couldn’t get a picture though. Boarding began around thirty minutes or so ahead of our new scheduled departure time.

Ready and waiting on the seat were premium head sets and blankets.

One thing of note was that towards the end of boarding, the overhead lockers looked completely full, as the crew were desperately trying to find space for the remaining bags. If a certain other popular flyer website is to believed, this is a problem confined solely to British Airways which has been brought on by introducing hand baggage only fares. Clearly not.
The captain gave a brief announcement, stating that we would have a flight time of four hours and thirty minutes and that we would be cruising at 34,000ft. Possibly my longest flight on an A320 series. Pre departure drinks and nuts were then dished out, just as pushback occurred – so I had to throw them back before they were snatched away from me again.

We taxied over to the runway before making a very powerful departure.

There was then a great view of downtown Buenos Aires – I could pretty much pick out where I’d spent the past few days by finding the regional airport and then following the coast line.

There wasn’t much left to see once we were over the water.

Soon after, the film started showing on the over head screen – Last Vegas. I’d seen it a month or so previously so didn’t feel any great need to watch it again.

Hot towels were handed out.

Around an hour after departure, the waft of food filled the cabin – so that could only mean that the dinner service was near. There was the choice of beef tenderloin or shrimps and rice. I chose the shrimp.

This was followed by apple pie and Baileys.

Once the dinner service was finished, I put a few videos on my iPad.

During which there was a bit of a light show outside.

Towards the end of the flight, I had a chat with the purser and asked if it was realistic that I’d make my connection. He told me not to worry, as this very plane would be heading on to Bogota. Well normally getting the same reg twice in a row wouldn’t be the preferred option, but I guess on this occasion it would make things a little easier.
Descent started around twenty five minutes before our updated arrival time, and the cabin lights came back on. Most of the descent was over the sea, although there were a few good views to be had along the way.

We touched down and made our way over to the stand.

Then the race was on to clear security and make my way back to the gate.

I’d say twelve minutes was reasonable! Although I then spent a good twenty minutes waiting in line to get back on board – there seemed to be an awful lot of Star Golds on this flight.

The crew announced a flying time of two hours thirty minutes. We pushed back around forty five minutes behind schedule, an hour and three minutes after this plane arrived from EZE, and made a long taxi over to the active.

Once there, we had to hold for a while for a Continited 767 to land. We eventually lifted off around twenty minutes after leaving the gate.

Unfortunately the views weren’t as good this time around as some cloud cover had turned up in the last hour or so. I won’t say too much more about this flight, as it was much the same as the last, plus I spent most of it snoozing. Hot towels were handed out around 45 minutes after departure.

The meal service started shortly after. There was a choice of chicken or pasta, of which I chose the pasta.

And then descent into Bogota began, landing around thirty minutes behind schedule in the end.

Upon arrival, most of the airport seemed shut. There were just a couple of immigration officers around who were freely dishing out entry stamps and the customs officer seemingly couldn’t be bothered to switch on the X-Ray machine – so didn’t, and just waved everybody through instead. There were plenty of taxi drivers out to make a quick buck though (or fifteen in my case).

Rather than spend the next 18 hours at the airport waiting for my connection to Madrid, I booked a room at the nearby Hotel Habitel.

And that’s where I’ll leave things for now.
Avianca / Trans America did reasonably well on these two sectors. The seats were comfortable, the food was tasty and the staff were friendly and efficient. The only minor issue were the delays and the lack of communication regarding them. Had I known, I would have spend another thirty minutes or so in the lounge.
Join me next time for the continuation of this ticket and find out how Avianca fare on a long haul sector in business.